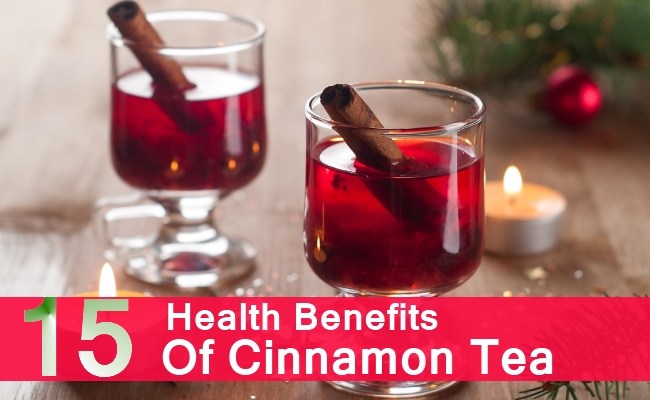 Research shows that regular intake of cinnamon tea can help reduce bad cholesterol levels which in turn can help you protect your heart.

Chronic inflammation can be dangerous. It can cause a number to life threatening diseases such as cancer, Parkinson’s, Alzheimer’s, heart diseases, etc. It can also lead to obesity, infertility, diabetes, IBS, PCOS and many other diseases. Cinnamon tea, due to its anti-inflammatory properties, can fight the harmful effects of inflammation.

Fights viruses and prevents the growth of bacteria

Cinnamon has anti-bacterial, anti-viral as well as anti-fungal properties which help to prevent the growth of harmful bacteria, fight viruses and combat various infections. So, drinking one cup of cinnamon regularly can keep you healthy and safe.

A substance present in cinnamon called as catechins can help relieve stomach discomforts like diarrhea, stomach cramps, indigestion, etc caused by indigestion. So, if you have any kind of stomach problems, drink cinnamon tea with honey and get instant relief.

Cinnamon helps to reduce our weight by creating a feeling of fullness and reducing our cravings for food. It also speeds up our metabolism and helps us to burn more calories.

Cinnamon is highly effective in reducing the pains of rheumatism as well as arthritis. So have one glass of cinnamon tea regularly once or twice if you have arthritis or rheumatic pain.

Cinnamon tea can help to keep our mouth germ free, fresh as well as healthy. Due to its disinfecting and anti- bacterial properties, it can also help to prevent gum diseases and tooth decay. It promotes complete oral hygiene. Hence, it is important to drink at least one cup of cinnamon tea with honey in the morning if you want to keep your mouth fresh and healthy.

Cinnamon is filled with anti-oxidants which in turn protect us from free radicals, fight and prevent chronic diseases like heart diseases, cancer, diabetes, arthritis, etc and also improve our skin.

Cinnamon, due to its anti-clotting properties, can help in thinning the menstrual blood. This in turn eases the menstrual pain caused by excessive clotting. It can also give some relief from cramping.

Cinnamon is an excellent blood purifier. It has anti-oxidants due to which it can remove toxins from our blood and purify our blood, which in turn can keep us healthy and also improve our skin. Hence, drinking one of cinnamon tea is necessary for staying healthy and fit.

Slows the growth of cancer cells

According to researchers, cinnamon contains anti- carcinogenic properties and thus it can help to slow down the growth of cancer cells. Therefore, drink cinnamon tea everyday and stay away from cancer.

According to a research, cinnamon tea can improve our brain function dramatically. It also reduces insulin level in our body which again is related to improved memory power. Thus, if you want to improve your memory, then try drinking cinnamon tea regularly. This is in fact the best way to keep our memory sharp.

Cinnamon contains calcium, fiber and iron in high amounts due to which it can help in reducing and controlling heart related diseases. Therefore, heart patients should consume cinnamon tea regularly.